Foreign Direct Investment in Costa Rica: What are companies seeking?

Home/Blog, News/Foreign Direct Investment in Costa Rica: What are companies seeking?
Previous Next

Foreign Direct Investment in Costa Rica: What are companies seeking?

The pandemic caused a reconfiguration in global value chains to which countries must pay attention if they want to continue attracting Foreign Direct Investment.

The most significant changes arise from the weakening of Asia as a destination for investment, and how Latin American countries, including Costa Rica, may take advantage of such situation.

To achieve their goals and keep attracting foreign companies, Latin American countries will have to create a series of new incentives, also called next-generation incentives.

Latin America enjoys another advantage, such as its geographical location, being described as a perfect destination for nearshoring American companies.

“The location itself is a fundamental element for the companies of our free zone regime. The trend of regionalization and nearshoring is boosting Foreign Direct Investment,” explained Gustavo González de Vega, president of AZFA.

On the other hand, the region also has a series of deficiencies that make it less competitive, such as the high cost of transportation, poor infrastructure, higher logistics costs, low digitization of production, and poor Internet connection. 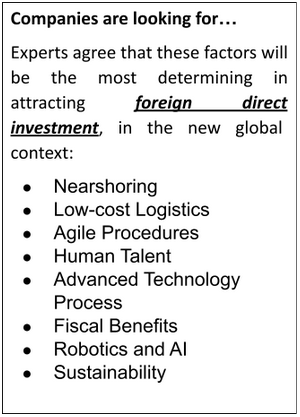 The region could even be up to 30% more productive if it reduces its logistics costs by at least 10%, as estimated by the Inter-American Development Bank (IDB).
The IDB also states that Latin America is behind in intraregional trade, with only 15% of inner flow, while Europe reaches up to 60%, and Asia 40%.

“Free Zones are fundamental pillars for the economic recovery of Latin America. The great opportunities that arise for regionalization or nearshoring in Free Zones, and the new-generation incentives, must be designed and implemented to attract foreign investment in the region,” said Carlos Wong, president of AZOFRAS.

Free Zones in the region should also adapt to new trends to attract Foreign Direct Investment, such as robotics, AI, Innovation & Development, low-cost logistics, and sustainability.

“Our countries must have the best infrastructure for industrial parks, the best free-zone legislation, and the most agile customs procedures. Furthermore, they should be more selective with the sectors where they want to compete to attract investors,” added Martín Gustavo Ibarra, Vice President of the Board of Directors of the World Organization of Free Zones.

The Free Trade Zone Regime returns income to regional economies, even when they benefit from a tax exemption in many of them.

In Costa Rica, the Free Trade Zone Regime generates more than 125,000 direct jobs, contributed US$600 million to social security in 2019, and returns to the Government US$2.4 for every US$1 in tax exemption, according to CINDE.